The American Dream - Broken from the Inside Out

As we scrolled through our social media feeds, few were quick to share a post to support or encourage the deplorable insurgence at the Capitol on January 6th, 2021. While some attempted to shift the blame for those responsible or to sympathize with the insurgents, they were the minority. Few defended these incredulous actions. This was not because we have isolated ourselves in a 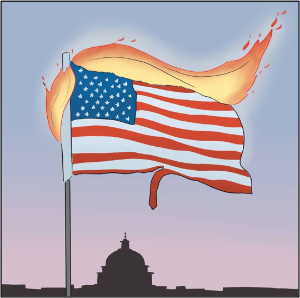 homogeneous bubble - because we haven’t - but because the actions taken on that day were simply un-American. Destruction is not part of democracy.

Instead, we saw social media posts showing Americans at home uniting together and understanding these actions were humiliating, heartbreaking, and unacceptable. A true disgrace to our democracy. This act of domestic terrorism was a breaking headline seen across the world as insurrectionists climbed the scaffolding and a mob moved through the U.S. Capitol building door by door.

The Capitol is likely one of most identifiable buildings in America. It can be seen from nearly any spot in Washington D.C. and sits at the geometric center of the city. Unlike other monuments that are static memorials to commemorate a person or event, the U.S. Capitol is a functioning building. Every day it enacts what we do in a democracy. It is not just a symbol. An attack on the Capitol is a direct attack on the function and the process of democracy.

The rioters who broke into the Capitol did so in order to halt our democratic processes. They wanted to stop democracy from moving forward in hopes of putting a stop to a peaceful transition of power from one administration to the next. In doing so, they damaged America’s just and democratic image in front of both our allies and our adversaries. America, a world power, looked weak and vulnerable. Democracy felt inconsequential.

“Like wealth, or health, political freedom may simply be something that people don’t value if they’ve always had it.”
Anne Applebaum, Columnist, The Washington Post

After having incited an emotionally charged audience to “walk down to the Capitol … because you will never take back our country with weakness,” where was President Trump? He was absent. Providing no more than a few tweets for hours but his silence was heard loud and clear. 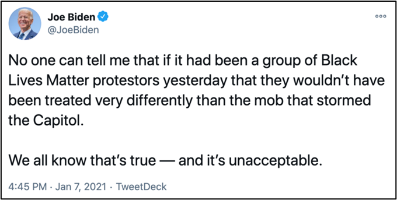 he Office of the President of the United States must be held to a higher standard. We must insist on transparency and ethical conduct on the part of our elected officials.

“America is so much better than what we’ve seen today.”
President Elect Joe Biden

For weeks companies, businesses, and essentially every human coming and going in and around the D.C. metropolitan area were increasingly aware of the pending threat of violence and protest surrounding January 6th. It was not a secret kept under wraps. The only people it appeared to surprise were the D.C. Metropolitan Police and the U.S. Capitol Police departments who were seemingly understaffed and under prepared for what ensued. 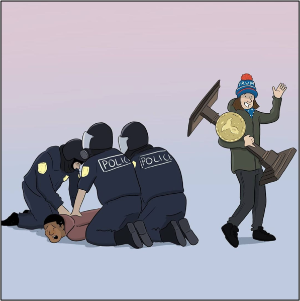 ts not already in place? Why did it take so long for backup from other agencies to arrive? Most importantly, why were requests to deploy the National Guard initially denied by the Department of Defense?* Washington D.C. was not prepared. As a result, a dangerous situation developed and was not quickly abated. Somebody dropped the ball.

The lack of police response to these anarchists twists the knife in an open wound of those who participated in the peaceful protests in support of justice for George Floyd, Breonna Taylor, and the Black Lives Matter movement throughout the summer of 2020 in Washington D.C. The magnitude of law enforcement preparation and presence for those protests was undeniable. Countless numbers of law enforcement officers, both federal and local, were intentionally placed and highly visible. They were heavily armed. The National Guard was fitted in riot gear. These protests were overwhelmingly peaceful yet were met with the intensity of a civil war.

On June 1st, 2020, the country witnessed an abuse of power and force as peaceful protesters were met with tear gas, rubber bullets, baton swipes, and the ramming of riot shields to allow President Trump to take a picture in front of St. John’s Episcopal Church in Washington, D.C. Peace was met with violence - the survivors have scars to prove that. Scars that were a result of a reckless show of force and an irrelevant photo.

Why were these pro-Trump rioters met with so little 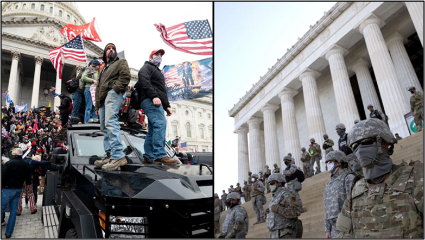 resistance only seven months later? Why wasn’t tear gas used sooner to disperse the riot? Where were the rubber bullets when these insurrectionists charged at police, or when they pushed and trespassed into a federal building? Why were Capitol police seen actively removing barricades and waving people into the perimeter?

Photos and videos taken by the press emphasize the light hand of law enforcement. Rioters congregating inside the Capitol as law enforcement is seen just standing around them. A woman guided by hand down the Capitol steps. An officer pouring water over a rioter’s eyes to relieve the effects of tear gas. Another posing to take a selfie as if the riot was something to celebrate.

The contrast in police response to these protests is painfully apparent, and we know why.

Joe Biden, who was President Elect at that time, pointedly stated, “No one can tell me that if that had been a group of BLM protesting yesterday, they would have been treated very very differently than the mob of thugs that stormed the Capitol. We all know that’s true… and it is unacceptable.” 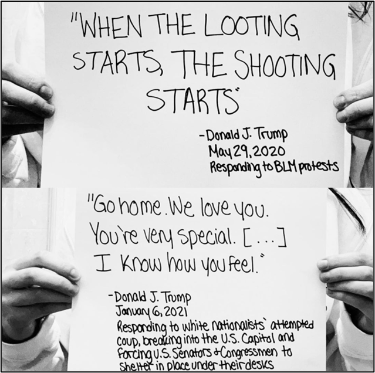 same as asking for violence against them. Instead, we are pointing out the truth that we have always known but was consistently downplayed - law enforcement has the ability to choose to engage in police brutality.

People from all races, backgrounds, and experiences join peacefully to fight for justice for Black lives? You are a threat that must be stopped at all costs.

Majority white rioters storming the Capitol in the name of President Trump and unfounded election claims? Come right on in. We’ll even hold the door for you! Trump himself illuminates this contrast.

President Trump chose to incite violence under the pretense of law and order calling peaceful protesters “thugs” and threatening with phrases like “when the looting starts, the shooting starts.”

Yet, in response to the rioters on the Capitol, President Trump chose to use comforting language in reference to the domestic terrorists, calling them “great patriots who have been badly and unfairly treated for so long.” Despite the violence, he embraced them. “We love you.”

In the aftermath of these events, the media was sure to highlight that Ashli Babbitt, the woman killed at the Capitol, was a 14-year Air Force veteran. While that may be a fact, it is intentional language used to garner a specific emotional response. One of sympathy instead of justice.

Ashli Babbitt was a domestic terrorist shot while trying 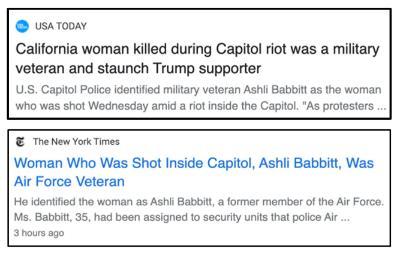 to force her way into the House Chamber where Members of Congress were sheltering in place. What do you think her plan was if she had been allowed to successfully make her way inside of the House chamber? Sit down and have a conversation about the electoral college? Not likely.

So where do we go from here?

We are Americans. We can disagree with one another. There is no democracy without debate. Some things, however, are not debatable. These include the importance of coming together as one nation to create an America that is just, that is equal, that is free for all residents - no matter your race, religion, gender or ethnicity. There is no better time than the present.

Use your voice. Take action. Get involved in your community. Be aware. Read the news - from multiple sources. Challenge your own belief systems. Ask questions (respectfully). Selfeducate. Join an organization.

On January 20th, America swore in the 46th President of the United States, but that alone does not change the country at its core. A new President doesn’t change systemic racism overnight. We have to work together day in and day out to first confront and address racism at all levels in our society - in our homes, at work, in our schools, in our government, and most importantly, in ourselves. That is where the real work begins.

We then have to consciously choose that the America of our future will be different. We must choose to protect our institutions and our democracy.